With the humid summer season around the corner in Florida, homeowners are calling professional HVAC experts to maintain their air conditioning devices or planning to replace their old cooling devices. Contact us today for Air Conditioning Replacement in Riverview, FL.

However, AC Replacement in Riverview, FL, is a thought which does not often cross people’s minds and homeowners usually fix their old air conditioning devices to keep them functioning. Nevertheless, replacing old air conditioning units in a timely manner is a beneficial alternative.

Due to their low power efficiency, old cooling units damage the atmosphere and Ozone layer. In addition, old air conditioning devices also take a considerable toll on the power bill. On the other hand, replacing old cooling devices with new ones having the latest heating and cooling technology will save the Ozone layer, operate more efficiently, and use less electricity.

Points To Remember Before Replacing Your AC

SEER, also known as Seasonal Energy Efficiency Ratio, is a proportion to estimate the cooling performance of any cooling device, and it varies from 13 to 25+.

The latest air conditioning devices with the highly-advanced HVAC technology use refrigerants, such as R410a that do not damage the atmosphere. In addition, these latest refrigerants and coolants also have much higher cooling power than the old ones, such as R22.

Old air conditioner compressors are generally single-step compressors, which produce noise, do not handle the dampness on humid days, and consume more electricity.

On the contrary, the new air conditioner compressors maintain the latest technology, letting them operate with less power. Moreover, the modern compressors don’t make a lot of noise, use less power, and handle humidity competently on hot days.

Air conditioning devices with old HVAC technology employ sheet metal vents. Though they are hard and sturdy, they produce a lot of noise and do not protect your home in any way, which induces a loss of cool air. In addition, sheet metal vents also lower the efficiency of air conditioners.

The new air conditioning units with the latest HVAC technology hold better two ductwork alternatives than the sheet metal vents. Likewise, fiberglass-lined or fiberboard vents used in the latest air conditioning models are noise-free with improved efficiency. It is not only eco-system friendly but also limits moisture and functions as an exceptional insulator.

The latest air conditioning models offer variable fan speeds appropriate for humid temperatures. Variable speeds imply less power consumption and better cooling. In contrast, the existing models usually had one or two speeds which did not assist in chilling the room.

At John’s Air Conditioning and Heating, our team of skilled and qualified professionals understands how to work with your air conditioning installation requirements. For more details on AC Replacements in Riverview, FL, call us at (813) 689-2722.

Contact Us Today For Air Conditioning Replacement in Riverview, FL 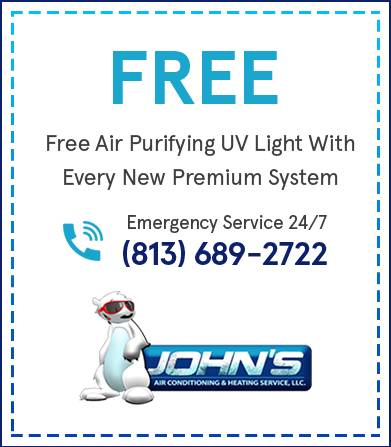